Swimming lessons are now a thing of the past for this year.  The kids finished last night, but it was questionable as Powell had torrential downpours an hour before and a 20 minute thunder delay before the lessons.  The weather held out and we finished with a bang! 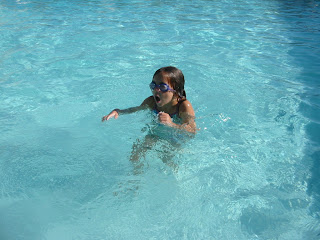 Addyson is now advanced.  She mastered most of the strokes, but her favorite of all is the backstroke.  She is such a FISH!!  She fell in love jumping off the diving board, trying new tricks.  As with everything new she learns, she does it over and over.  She'd jump off the board, climb out, and get in line to jump again.  This continued before and after lessons until it was time to go home.  Austin wasn't comfortable with it yet, so he watched her.  She's working on the diving part, but the skill is something for her to challenge herself.  I am so proud of her!!

Austin knew if he wanted to keep up with Addy and have a friend at the pool to swim with, he must conquer his fear.  (We've yet to see any of his school friends at the pool, so he swims with Addy and her friends.  They love him!)  On the last night, he bit the bullet and began jumping off the board without his teacher, before and after lessons.  Now, he's like Addy:  jump off the board, climb out, and get in line to jump again, over and over.  Yeah, Austin!  He will be in beginner again next year, but he's improved so much.  He will need to work on floating on his back, other strokes, and diving, but I am proud of him as well. 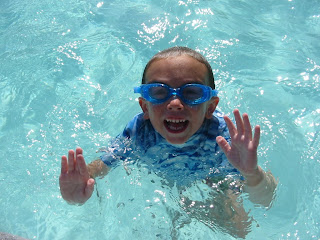 Both of my children love the pool, one more than the other, but they look forward to going.  The mother of Addy's friend asked me at lessons if we are at the pool a lot when I realized we are.  It's our summer "thing"  and because of going multiple times a week, our children are comfortable in the water, and practice (playing) what they have learned.  We can't expect them to become proficient at something if they aren't given the opportunity to practice on their own.  And so we go!  They are growing up so fast!
Posted by Shelly at 5:11 PM