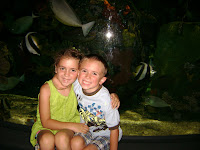 Our first day was HOT (as would be the next 3 days)!! The heat index was pushing 100 and on Sunday...it reached triple digits.  I always love aquariums!  There's just something about seeing all the water creatures that God has created, each one unique.  We ventured to Ripley's Aquarium our first day.  It had a movable walkway(similar to those in airports) where the tanks were on all three sides.  There were sharks, stingrays, eels, and more.  Addyson and Austin liked it, but were more inclined to go towards the play area.  That afternoon we headed to our next hotel, where we would spend 2 1/2 days before heading to Oak Island. 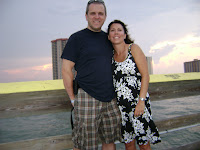 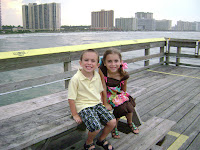 Sunsets on the pier

Saturday, we headed  Oak Island.  When we share with our friends and family where we stayed, they always remark, "Never heard of it."  Andy's response is always, " That's why we go there!!"
I had some struggles adapting to little technology.  We did not have internet and my blackberry worked very little, so tv was our only information tool.  I needed to chat with my online class, so Andy scouted out the local coffee shop that had free wi-fi!

Our daily routine was:  get up, eat breakfast, go to the beach, come home, shower, eat lunch, take a nap, head to the pool around 3, come home, shower, fix dinner or go out, and so on.  We went into Southport, hoping to visit the huge NC Fourth of July festival, but it didn't begin until late Friday evening.  We opted for ice cream cones, which neither child has perfected the art of eating before they melt.  Afterwards, Austin's yellow shirt was stained with chocolate!! He told us he doesn't even like the cone!! 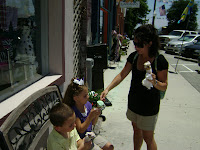 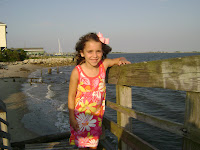 On a bridge in Southport 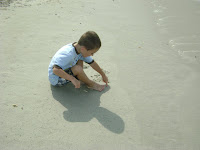 Austin loves digging in sand.  It must be a favorite past time of all kids.

In the airport, waiting to go through security.  Home Sweet Home! 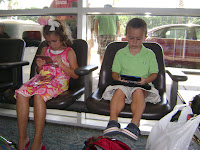 July 1st, Oak Island does it's annual fireworks, so we were standing on the boardwalk waiting.  A family of four walked past us, wearing the glow-in-the dark necklaces that are so popular at festivals.  Austin said, "Look Mama, they're tie-dye necklaces."  A few minutes later, one of their boys walked back up on the boardwalk and gave Addy and Austin a necklace.  Andy and I immediately spoke on how this family "filled Addy and Austin's buckets" and did a random act of kindness.  We want our children to recognize when good things happen and people do good when not asked.  It was a great time, minus the bug bites and a good firework show.

“Kindness is more than deeds. It is an attitude, an expression, a look, a touch. It is anything that lifts another person.”